The design is a reflection of a more traditional "platform" design. It relies heavily on "clicking" or "tapping" icons as you would in most other applications and on a desktop computer, but also involves swiping which is common for hand-held touch screen devices.

Currently, police officers rely on paper and pencil to take notes at the scene of an incident, then take those back to their desks at the department headquarters to type up their report in a program that is non-linear, confusing, and difficult to maneuver within. The current system is very inefficient, relies on their own memory at the end of a shift, and takes officers off of patrol to spend the end of their shift typing out all their reports.

The goal was to create an interface that would make it easier for officers to record data at the scene, as well as make it easier to input that data into their computer system for finalizing the reports. Our initial task was to read over the paper reports and discover ways to group common elements in a way that is easy to read and understand while decreasing the amount of time needed to populate all of the fields. With using the phone we also determined that many fields can be filled in using the devices clock and GPS. 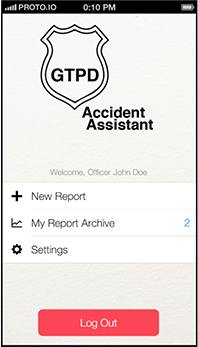 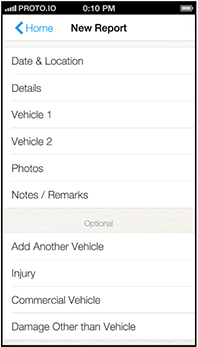 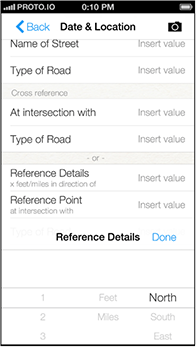 The overall design was made to resemble current standards in mobile development while also employing some skeuomorphism to create a conceptual model for the users that they have seen previously. Icons and labeled buttons are also grouped by proximity, closure and common fate, allowing for a familiar and contextually aware menu display and navigation. The navigation through the application is similar to other mobile applications, and uses the officer's recognition by included the same information you are supposed to enter in the other computer program already used limiting the learning curve. It was also important that their was a simplification of the design to reduce errors and only revealing the sections necessary to complete the report for that specific incident. 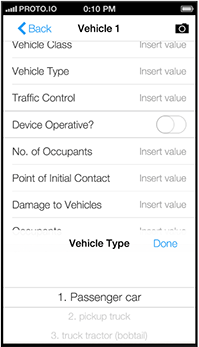 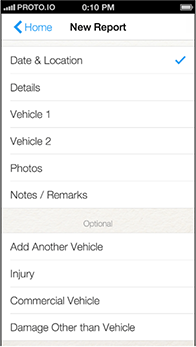 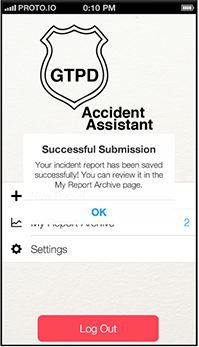 With the implemented design, our original goals of increased police safety, improved data transfer and recording, and decreased time spent at the department were achieved. With the understanding that while we only focused on a single report, the platform designed is capable of having other reports implemented and executed within the same application.